Following up the first of his neighborhood experiences, writer and experience designer James Carter heads to Park Slope, Brooklyn for part two of NY_Hearts. Part walking tour, part love story, NY_Hearts offers people a new way to discover NYC by stepping into the characters’ shoes. Set in four different NYC neighborhoods, participants enjoy drinks and other surprises from local businesses, which are featured in an audio story shared over mobile devices. Other bits of the story include character websites, online character vlogs, original music and visual art.

Carlo Albán plays the role of Sal, a struggling musician who meets the love of his life, Madelyn. Together, amidst the brownstones of Park Slope, they make music and find more than just a songwriting partner.

“I can’t wait to share the second part of this four part love story,” said creator and producer James Carter. “Part two brings the tale of Sal to a close and introduces a new chapter in this series. Plus, there are several great local Park Slope restaurants and merchants appearing in this story.”

NY_Hearts: Park Slope
April 19 – May 12
Purchase tickets at BrownPaperTickets.com
For details about the show or to listen to part one, visit www.NY-Hearts.com 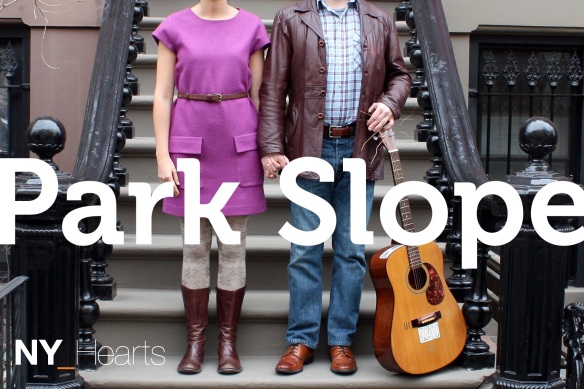 Carlo Albán has been acting in theater, film and television for over twenty years. He has appeared on television shows ranging from Sesame Street to Prison Break, and in films such as Whip It, Margaret and 21 Grams. As a writer, he developed his solo show Intríngulis, dealing with his experiences growing up as an undocumented immigrant, with Labyrinth Theater Company. Intríngulis received its world premiere in November 2010 in Los Angeles, in conjunction with Labyrinth and the Elephant Theater. Carlo is a member of Labyrinth Theater Company and a recipient of New Dramatists’ Charles Bowden Award.

One Muse Presents is a presenting and producing company of James Carter a playwright and experience designer. He uses transmedia to tell rich and exciting stories. Transmedia describes one story told over multiple digital and physical platforms. His previous transmedia play, Feeder: A Love Story, was presented by terraNOVA Collective at HERE. More about One Muse Presents and James Carter at www.onemuse.com